Often, Patricia Bokowski, having what you want is a function of letting go of what you have.
If you know what I mean.
Want something?  The Universe / How can I feel happy?

Odd, huh, Patricia Bokowski, the stuff some folks cling to?

“Stop asking people who have never been where you are going for directions.” – NineFrogs Wisdom

A few years ago my son came into my office because the screen on his phone had froze.

After working at Cablevision for over 26 years, if there was one thing I learned when something didn’t work, you rebooted it.

We did that for everything at Cablevision.

So, I told my son that’s what we needed to do.

So we decided to take a ride to the Verizon store and see if they could help solve the problem.

When we got there, we sat down with a guy, explained our problem.

The guy took the phone, pushed a bunch of buttons (just like we did) and then proceeded to tell us, the phone was too old.

See, he told us, phones are only supposed to last a year or two at most.

And this phone was almost 3 years old.

Way too old, according to this guy.

Then we headed over to BestBuy.

Found ourselves another guy.

Told him our story.

He pushed a bunch of buttons (like we did).

Then proceeded to tell us we needed a new phone.

That phones are not meant to last more than a year or two.

These guys must be taught that answer for phone problem.

By this time, we were both frustrated and annoyed.

So we went home.

With a still frozen screen phone.

Now, by this time, (in my head), I am determined to get this phone working.

I’m no technical person by any means.

But I just knew I could get that phone working.

We arrived home, contemplating our next move.

After eating a late lunch (by now it was after 2:00pm), it was feeling like we were not going to be able to fix the phone.

So, our last ditch effort was to call Apple, and see if maybe they could help us.

We got a very nice guy on the phone, told him our story.

He told us to punch a whole bunch of buttons (like we did).

Then proceeded to tell us that cell phones aren’t built to last more than a year or two?

Then tried to sell us a new phone.

I should mention, the guy at Verizon and the guy at Best Buy both tried to sell us a new phone.

And I have to tell you, there was this little voice in my head that kept saying, ‘you can fix this.’

After we finished our call with Apple, I told my son to leave his phone with me.

I can’t tell you exactly what I did.

It was a combination of turning it off and on.

Taking the battery out.

Turning the power off.

And God knows what else I did.

But, low and behold, 45 minutes later.

I FIXED the phone👈👈👈

The frozen screen was gone.

And all was right with the world!

So why am I sharing this story with you today?

Because, most people are so quick to give up on something the minute it becomes too hard.

And then they wonder why they are unhappy!

Happiness starts with doing things that make you happy.

Happiness starts with doing things that we didn’t think we could do.

How can I feel happy? https://www.ninefrogs.com

Do something today that you have never done before.

Another thing ‘most’ people don’t do! 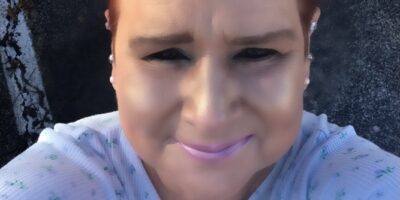 Ready to glow this Holiday Season only you’re ju

“People will stare. Make it worth their while! /

Anything is possible with sunshine and a little pi

Can’t get your pretty on? Tired of feeling tired

The Legend Says / You Are Not Half / Remember that

“Knowledge is power. But enthusiasm pulls the sw

“Magic is believing in yourself, if you can do t

The Frog’s Den / Life is like that! / Happy Hall

In case no one told you today! / And we wonder why

My latest TikTok on Facebook / Keep it happy! / #f

The Law of Attraction / Remember that! / Stop comp

Need a smile? / Follow me on TikTok - The Frog’s

Adorable! / and a great reminder of what we can all do together! / #fashion #instagood #photooftheday

Ready to glow this Holiday Season only you’re just not feeling it? Lost your smile? Can’t get your pretty on? Book your personalized Image Coaching appointment with me and let’s change that ASAP! Email me at pattib@ninefrogs.com or TEXT me at (516) 603-1479 today! Working with me sill change your life! 🛍🛍🛍

“People will stare. Make it worth their while! / Check out the latest blogs up on the website! / #fashionblogger / #lifestyleblogger / #smile 🐥🐥🐥

Stuck in a rut and can’t figure out how to get out of it? / Ready to shine only you don’t know how? Can’t get your pretty on? / Book your Image Consulting appointment with me today and let’s change that! / Email me at pattib@ninefrogs.com or TEXT me at (516) 603-1479 today! 🦋🦋🦋

Anything is possible with sunshine and a little pink! / nailsclips109 / #fashion #nailart #fashionblogger 💖💖💖